I must confess that although I became a Founder as early as on October 6th, 2018
(and I decided to pay the fee instantly, with no hesitation)

besides telling a few people about this new biz at the very beginning
I haven’t started promoting (sharing the good news) until July 2020.

It is because I had doubts, a lot of doubts plus I was unable to cope with all the naysayers.
On top of this, I was scared that something might have gone wrong
despite all the good (best) will and intentions of the creator.

But later on I realized what my real problems was…

ONPASSIVE success = my own success!!!

I will have money.  Finally!!!  I will no longer have to worry about my tomorrow…

If the person who told me about OnPassive has also told me that I would have wait for the launch for over 2 years, I suppose I wouldn’t have joined as a Founder…

I am so happy he haven’t told me that…

Why it takes so long?

Have you ever created anything that can be improved before serving?
If yes, then you understand the process of creation. 🙂

In case of ONPASSIVE – because every single product has been created from scratch by the Company employees – there was/is no other way but to patiently wait until at least the products that will be launched together with the money-making aspect are ready beyond perfection.

Yes, we all know Microsoft products – Windows.
They are never perfect upon launch (these dreaded updates)
and some versions are not working well at all.

But – Bill Gates does not care about the end users, while Ash Mufareh cares a lot.

Besides – Bill Gates (because he cares about his own pocket in the first place)
was able to force customers to have Windows.
Only a few, more gifted with computers, can choose another option – Linux.

Ash Mufareh decided on a different solution – he wants people choose ONPASSIVE products.
Because of this reason ONPASSIVE product must be the best – affordable, easy to operate/use – perfect.

While waiting for ONPASSIVE launch
I continued joining new programs/businesses
(especially in 2020 – after we were told the launch will take place this year!!!!)

After joining and paying the fee

I always discovered something that I didn’t like, even that I had been deceived!

Even if my new biz is 100% honest and clearly states
“if you want to earn anything – refer/bring 3 new people first”
– how can I honestly promote such a biz knowing
how few people are able to recruit and that ONPASSIVE will do everything for us???

My only excuse for joining other businesses while being a Founder of Onpassive was
– I wanted to earn more money so that I could start with the highest level – $900.

Suddenly I realized something – only in 2020 I wasted some $500 !!!
(fortunately I still have $400 that I haven’t managed to waste)
for the businesses I should not had joined because I knew I would not be able to honestly promote
because I would never be able to forget about ONPASSIVE better Solution.

So – if I can give you any advice – stop joining other programs.
Wait patiently for ONPASSIVE launch (after all it will truly take place soon).
If, at that time, you do not like what you see, then go ahead,
and again start trying other programs, one after another.

After I realized all the above I suddenly realized something else:

I am no longer frustrated because of the long wait!!!

And decided to promote ONPASSIVE again.

So I created my own capture page, and wrote my autoresponder messages.

And, guess what has happened?
The more I have been writing about ONPASSIVE,
the more I understood and loved the Solution created by Mr. Ash Mufareh.

Also, reading other people’s reviews (even negative or not so positive)
helped me to put myself on the most positive track.

Because these opinions made me think
and what I knew subconsciously suddenly surfaced to my consciousness.

WHY I am not going to promote anything besides GoFounders/OnPassive

ONPASSIVE will allow us to promote our other businesses/programs/products as well.

Besides receiving all the tools to create your own sales funnel, there will also be an easier way.

You will have an option to present your other businesses/products to everyone who joins ONPASSIVE through your link.

Because ONPASSIVE will promote for us and every person interested will start by creating a free account, 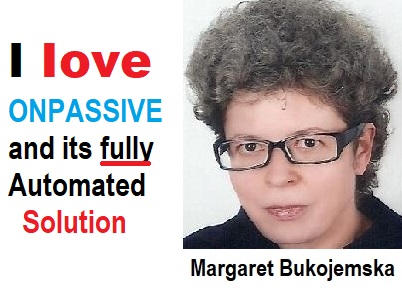